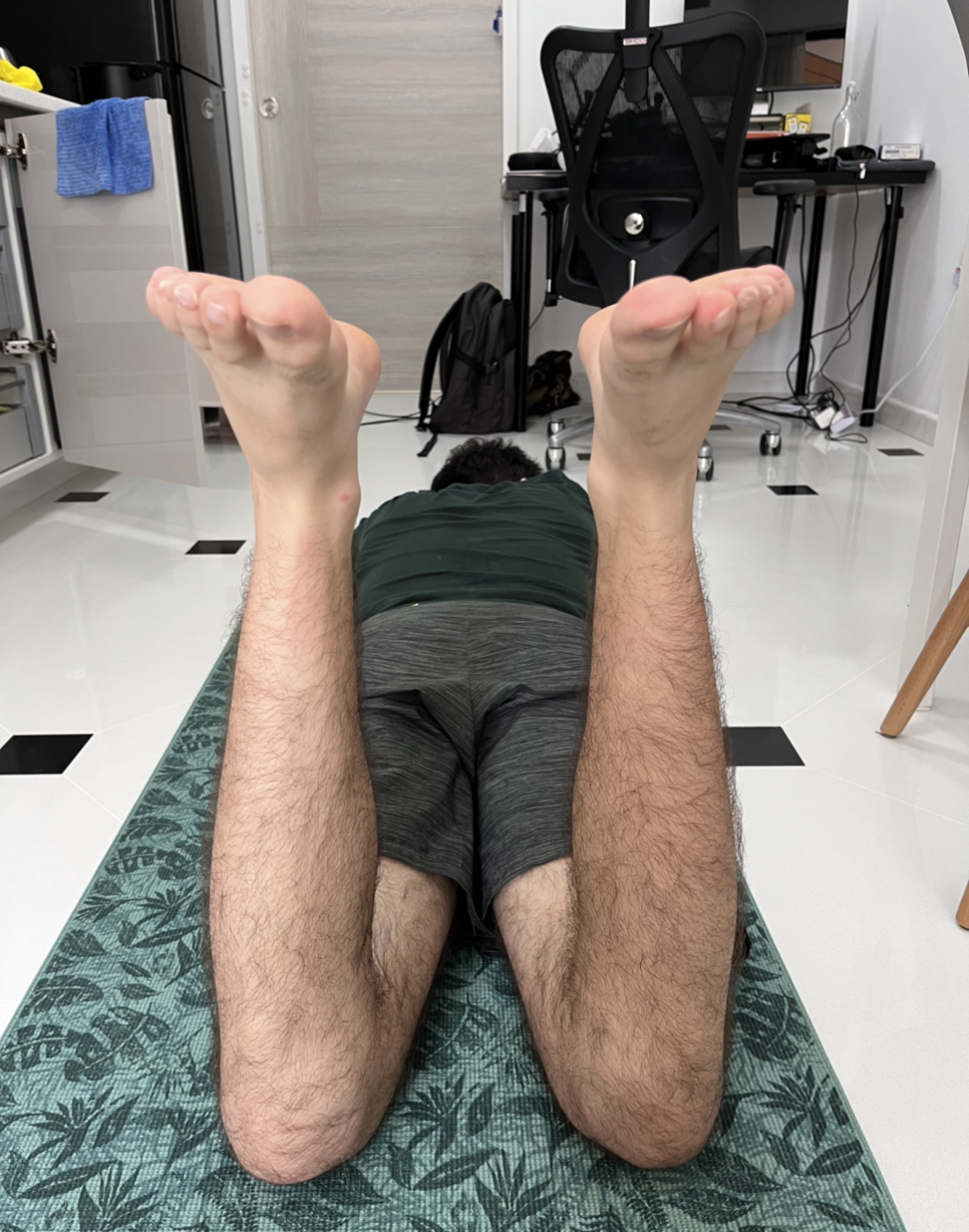 In this photo, you can see that Buttie's right leg appears longer than his left. However, when our therapist Ying held both feet in neutral, side by side, they showed up in equal lengths. Why is that? The resultant length difference is a result of tight muscles pulling the joints into different directions, giving a visual illusion of a leg length difference. In this case, Buttie's right outer shin muscles as well as the muscle in his knee (popliteus) were alot more overworked and tighter, pulling the shin and foot into a more externally rotated position. This gave him a sensation of a leg length difference. This would be dangerous if Buttie had followed internet advice and started wearing orthotics, which could result in a worsening of his compensated alignment.

Interested on what happened next? Read on to understand the backstory!

So, Ying first started seeing Buttie (our favorite patient's nickname! :-) ) for bilateral knee pain. The pain was located specifically over the inner part of both knees. Upon bending the knees, pain was felt just 3/4 into the bending motion. Direct palpation elicited vague responses of the pain.

Upon assessment, it was clear what was going on. When Buttie stood or walked, there was excessive horizontal front-back motion going through his knees while his pelvic slouched back. This meant that he was initiating alot of his propulsion forces from his knees while his limited mobility at his hips continued to encourage movement reliance upon his knees.

This excessive front-back motion at his knees placed alot of pressure over his knee cap. Buttie also had a tendency to create stability at his knees via excessively turning out his feet. Whereas, in an ideal situation, this turning out motion of his knees should be performed by his butt (hence, his nick!). His poor compensatory habits combined with weaknesses of certain key stabiliser muscles, were the root causes of his knee pains. His resultant motions in his daily living consistently create excessive strain over at the insertion of the surrounding muscles at his knee joint as well as the tiny muscle in his knee. When this particular tiny muscle overworks, it can block the knee joint from bending properly.

The resultant experience is painful and tight knees. Because the pain didn't simply go away on its own with rest, it was extremely frustrating for Buttie. I mean, doesn't rest treat all our issues? Often, rest treats covid, stomach flus or heartaches - But knee pains often don't go away on its own even with time!

Usually, pains at the hips and knees often remain because certain muscles are not strengthened and hence, movement patterns remain ineffective and even, injurious.

We will be by your side from start to end. And even as you move onto completing your next milestone, we wish to continue to lend our support to you.